The attempt to the wrist and fingers extension 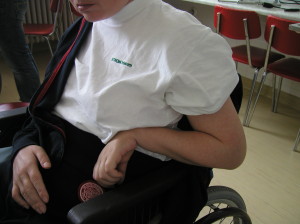 Before surgery we consider not only the severity of deformities , but also age, IQ, motivation  and other neurologic diseases. A very important factor is family support and complex treatment.

In 70% of cases I first reconstruct the grip and the supination is also better in this phases. At the second stage I release the elbow flexion contracture and finally I correct swan-neck deformities. In 30% I start in the elbow flexion contracture with the proximal release of wrist and fingers flexors and the grip is reconstructed in the second phases.

So far I have operated on 283 patients, most of them teenagers with cerebral palsy. Similar deformities can be seen in patients after brain stroke, brain injury, brain surgery, encephalitis or with congenital anomaly of the brain.

Preoperative therapy should be aimed at maintaining function and preventing contracture. Exercises and splinting are important and adaptive devices can be very useful to enable patients to independently perform daily activities. After conservative treatment we make a decision for surgery.

No single method is universally successfull – we have always combined surgical methods. Operative procedures are directed at  release of skin contractures and spastic muscles as well as at augmentation of weak muscles and sometimes stabilization of MCP joint of the thumb.

I always use turniket control with the brachial block  in combination with  general anaesthesia or sedation and all sutures are absorbable to minimize stress after surgery .

After surgery we use static splinting to preserve new position in each patient for 2 or 4 weeks. After that removable splints and often dynamic splints are applied and we start exercises early or later – it depends on the type of reconstruction. The most important is occupational therapy after surgery.

All of our patients are satisfied because they considered the procedure was beneficial to the quality of their life.

One of the greatest benefit is less or none involutary movement to elbow flexion. Decrease of spasticity allows voluntary movements withouth involuntary elbow flexion which has psychological impact. Patients can willingly grasp and also place an object on the table or elsewhere in space.

Improvement of the forearm supination allows to hold a subject, better hygiene or to get dressed.

Improvement of the wrist and fingers extension makes possible a stable grip position.  Patients can grasp small and also larger objects, they can lean against the table by their palm.